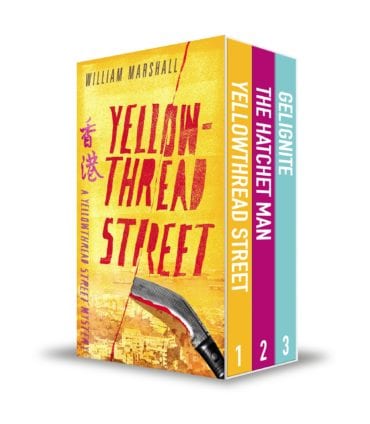 Yellowthread Street Among the gangsters and the goldsmiths of Hong Bay, Chief Inspector Feiffer and his police department had their hands full . . . tourist troubles, a US sailor turned stick-up artist, and the jealous Chinese who solved his marital difficulties with an axe. Then the Mongolian with a kukri brought an extra touch of terror to the district . . .

The Hatchet Man Postman Lawrence Shang was watching a film called The Axeman of Shanghai when his life abruptly ended. Carpet trader Edward Peng was enjoying The Last Picture Show. So begins a series of murders across the Hong Bay district of Hong Kong – and a nightmarish investigation for Harry Feiffer and his staff at the Yellowthread Police Station.

Gelignite In the seamy Hong Bay district of Hong Kong, crimes of every shape and size were commonplace. But not letter bombs. Not till Mr Leung and Mr Ramaswamy were spread bloodily over the office walls. When Detective Inspector Spencer narrowly escaped becoming victim number 3, the Yellowthread Street police were grimly determined to track down the culprit.

Yellowthread Street brings to vivid life a seamy world where people called Osaka Oniki the Disemboweller, Shotgun Sen and The Chopper feel at home, a world of surreal possibility recorded with unique humour and a poignant sense of humanity.