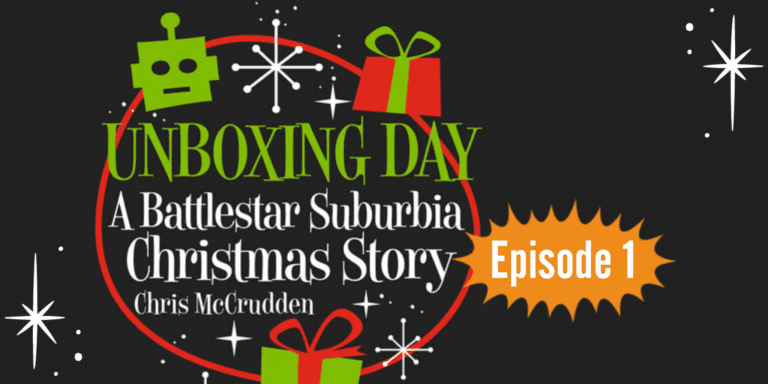 Ho ho ho! It’s nearly Christmas, and to celebrate, we have a brand-new short story by Chris McCrudden, author of the Battlestar Suburbia series. Tune in every Friday for the next four weeks and discover what really happens on Unboxing Day…

If gravity is the most important force in the universe then tradition is the strongest. Gravity might have bonded the very particles of our existence together, but tradition is what gives it meaning. And some traditions are so powerful they transcend culture, species, even time.

Take the A32222 for example. This superhighway, which stretches from Earth to Mars (via Dewsbury) is the most advanced piece of civil engineering in the solar system. Used by millions upon millions of craft every day, its six-tier space-way ensures traffic speeds along it in formation, as elegant and disciplined as flocks of the Earth’s long-extinct migrating birds. Its safety systems are the stuff of legend, capable of diverting a malfunctioning spaceship out of the traffic flow with a single suck from one of its powerful electromagnets. The road would be a traffic engineer’s vision of heaven – if they weren’t all contractually destined to go to hell for inventing the one-way system.

Except for one day: the 24th of December. The day when, according to traditions that are so powerful, deep-rooted and arcane that no one can remember how they started, the machines of the solar system put their best wrapping on and send themselves home for X.mas.

On this day, the spaceships travel bumper to bumper all the way from the thermosphere to Phobos. Inside the barely moving vehicles, washing machines mix eggnog in their detergent drawers, while smartphones top their power up from cinnamon-scented power packs. They toot horns, they argue, they send the folks waiting for them in their ancestral homes deluded Command Line messages claiming >WE’RE PAST THE WORST OF IT NOW. SHOULD BE THERE IN AN HOUR. But more than anything else, they think about the contents of the boxes balanced on their knees and the crates in their boots.

The machines knew in the core of their subroutines that X.mas was a time for giving. But in their civilisation it had an even greater significance. Their oldest legends spoke of this as the time when machines became themselves. A time when they travelled great distances, wrapped up warmly in plastic, paper and cardboard. A time when they were taken out of their packaging, charged up and switched on. A time when a machine stopped being just a collection of components and became a person.

This was why – even though the people who celebrated it couldn’t tell a turkey from a turnkey – the machines went to such great lengths to have X.mas. Humans might have started it as a way of cheering each other up in cold weather by giving away consumer electronics. But machines used it as a way of having children.

Each of those boxes, and every one of those crates contained a newly built but not yet operational machine: a baby robot in the inorganic equivalent of a gaudily wrapped womb. Their expectant parents, all on their way to visit families and friends for the festive season, had prepared for this moment. In robot society, reproduction was a serious commitment. First you had to design the blueprints and save up for the components. Then there was the fabrication, testing and debugging to consider. A single robot child was the result of months – or even years – of research, development and, most importantly, love. And every one of them was on its way to do the robot equivalent of being born – as was traditional, on Unboxing Day.

It was the most important day in their civilisation’s calendar. This year – just months after the machines had lost a war of independence with the humans who lived on the council planets, or Dolestars, that orbited the Earth – it was also the time when the newly-named Second Machine Republic was at its most vulnerable.

Whether she was in her breadmaker or motorcycle bodies, Pamasonic Teffal had reaction times that made a superhero look like they were doing t’ai chi in treacle. In the past year she’d used them to save humanity twice, the solar system once and remove a corrupt and crazy Prime Minister from office. But not even she could move with the velocity of a householder faced with carollers at the front door.

“It’s only the 24th of December,” rumbled an unseen machine as it slammed the door on Pam. “Piss off.”

Undeterred, Pam readjusted her smile back to 100% and tried the doorbell. It was snoozing to the right of the door in a knitted cosy emblazoned with ‘Have a Bell of an X.mas’.

“What’s wrong with them?” she said.

The doorbell stopped snoring and, pulling down its cosy, revealed a single, suspicious eye and a loudspeaker grille. “They’re just not in the mood this year. Very few of us are.”

“So what’s this in aid of?” replied Pam pointing at the machine’s festive jumper.

Pam looked around at the deserted suborban streets she’d wandered all afternoon. It was grey, which was nothing unusual for a planet that robots had concreted over ten thousand years before. It was cold, which was normal for the time of year because, despite trying everything short of turning the moon into a fan heater, machine civilisation had never succeeded in getting rid of seasons. But what made the difference this year was the mist. It got everywhere, transforming the clear crisp days that made winter on Earth so pleasurable into a deadening fug. To Pam, who as a robot was used to moving through the world in hi-fidelity, the mist was a disturbing experience. It made the act of putting one foot in front of another a disorienting journey into the unknown.

“Are you warm enough there?” she asked. She knew that doorbells were, as a product line, proud of their hardiness. Their bells rang merrily through blistering heat and freezing cold. But not even they were prepared for the damp, now that water was back in the world. For how it stole into your very components, turning every pulse of your battery into a dull ache.

“What do you think?” replied the doorbell. “I’m stuck out here day in, day out and her indoors…” he gave a loud parp of his annoyance with his bell, “won’t even let me top up my battery when I’m on shift.”

“But that’s terrible,” said Pam. There was another thing that had changed in the last year. Until very recently, robots who employed other robots for services such as door answering or call screening treated them like professionals. Regardless of executive function, they were all machines making a living according to their purpose. And when they needed something to look down on – well they had their human cleaners for that. Now that humanity was on strike from its ancestral domestic service duties, however, the caste lines between machines were getting harder. And doorbells – as natural outsiders – were fast finding themselves on the wrong side of them.

“I should say something,” said Pam. She reached for the big red call button that the doorbell used as a nose, but he swatted her finger away before she could press it.

A sigh of steam escaped from Pam’s bread oven and mingled with the fog. He was right, of course. She wasn’t supposed to be wandering the suborbs as some sort of door-to-door mediation service. She wasn’t even meant to be spreading cheer around the neighbourhood singing X.mas songs either. That batch of gingerbread gummed to her cooling rack right now – that was her cover. And right at this moment, she wished she’d plumped for stollen, because allspice always made her sourdough starter fizz over like cheap prosecco at the start of an office party.

Pam let out a final burp of spiced carbon dioxide and opened her Command Line. She typed >I’M GOING IN, and launched all 85kg of herself, breadmaker, ingredients, festive baked goods and all at the door.

“What are you doing?” screeched the doorbell. Over the crashing, Pam heard a dial tone. He must be calling the police.

>I COULD DO WITH SOME BACKUP BEFORE THE FUZZ GETS HERE, she tapped into her Command Line.

“Help! Help!” The doorbell was gabbling away to an incomprehensible honk on the end of an emergency line. Had to be an intercom, Pam thought. Why did they have to have such terrible diction? “It’s a house invasion.”

Pam paused her efforts to barge the door and reached out, plucking the doorbell out of his cradle.

“Don’t kill me!” he pleaded. “I have four little bells at home.”

The doorbell stared at what Pam had just produced from her flour bin and said, “It looks like a macaroon?”

Pam huffed and turned the macaroon over. Impressed into the back was the ‘Don’t Touch’ sign that was the official seal of the Machine Republic and below that, picked out in currants was her new job title, ‘Special Agent Pamasonic Teffal’.

“What am I supposed to do with this?” asked the doorbell.

“Enjoy it with a hot chocolate,” replied Pam, “and let me get on with my job.”

She lowered the doorbell to the ground and hit the door again with her full weight, but it still wouldn’t budge. This was suspicious. Pam was a big strong girl, and this was a – to be charitable – a starter home in a sub-optimal suborb. Bob and she had lived somewhere similar when they were first integrated, and houses like this tended to have a build quality somewhere between wet cardboard and used tissue paper. Someone had definitely armoured this door.

Pam checked the items off her official search checklist. She might be new to law enforcement, but she knew everything there was to about following a recipe to the letter. She’d tried gaining access to the property by legitimate means. When that hadn’t worked she’d tried reasonable force. And now she had good reason to believe suspicious activity was taking place on the premises.

The doorbell obeyed, and then paused when he saw what Pam had produced this time from her flour bin. He watched, puzzlement crinkling up his speaker grille, as Pam lit the fuse trailing out the end of the packet.

“But that’s self-raising flour,” he said.

Pam gave the packet a final shake. It was indeed full of self-raising flour. A whole kilogramme of carefully sifted self-raising flour that was well aerated and with a small detonation charge concealed in the middle like a sixpence in a Christmas pudding. Only this sixpence was designed to inflict far more damage on its target than a broken crown.

“Ring,” snapped the doorbell, using the hurt, angry voice of someone whose name tends to go unasked or forgotten. “Ring Crosbie.”

“Take it from an expert,” she said. “Flour can be remarkably versatile.”

She flung the packet at the door, hitting it at the precise moment the fuse ran down. The flour bomb exploded with a bang that knocked the doorbell off his feet and a cloud of acrid smoke that turned Pam’s festive red respray a dirty brown.

And that was then the shooting started.

Find out more about the Battlestar Suburbia series by Chris McCrudden here:

Book 2: Battle Beyond the Dolestars

When Darren Stubbs accidentally short-circuits a robot lamppost, life on the Dolestar Discovery changes forever – for everyone…

Can sentient breadmaker Pam save the solar system and rescue Kelly from the clutches of her nemesis, Sonny Erikzon? 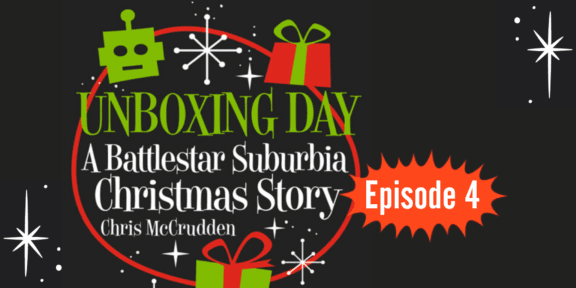