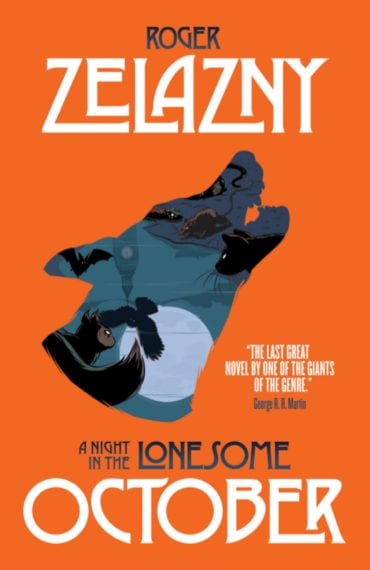 “One of Zelazny’s most delightful books: Jack the Ripper’s dog Snuff narrates a mad game of teams to cause or prevent armageddon.” NEIL GAIMAN

All is not what it seems.

In the murky London gloom, a knife-wielding gentleman named Jack prowls the midnight streets with his faithful watchdog Snuff – gathering together the grisly ingredients they will need for an upcoming ancient and unearthly rite. For soon after the death of the moon, black magic will summon the Elder Gods back into the world. And all manner of Players, both human and undead, are preparing to participate.

Praise for A Night in the Lonesome October:

“. . . this book is unique; the premise, Zelazny’s writing and the atmosphere conjured up are something very special indeed.”

“A geek fest extraordinaire with huge wit, warmth and intelligence.”

“An absolute gem – how can you not to like something written from the perspective of Jack the Ripper’s super-intelligent dog?! An outstanding example of truly original fiction.”

“This is pure brilliance . . . Highly recommended.”

“The last great novel by one of the giants of the genre.” George R.R. Martin

“A madcap blend of horror tropes and fantasy. . . There aren’t many authors who would set out to write a novel in which the Wolfman and Jack the Ripper were the two heroes . . . And I’m not sure anyone else could have made it work.” Science Fiction Chronicle